On September 2, 2015 the Decimal Lab team, Dr. Isabel Pedersen, and students Nathan Gale (graduate student), Cameron Nicoll (undergrad student), and Samantha Reid (UOIT alumni and research manager) embarked on their Japan Odyssey. Flying halfway around the world to conduct field research, forge international connections, present their iMind technology project at the International Symposium of Wearable Computing (ISWC) Design Exhibition, they learnt as much as they could about emerging technologies in the nine days they had. 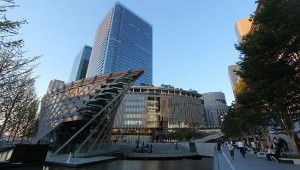 opportunities to collect information and learn from the various presenters. However, the highlight of this event for us was demoing iMind, our arts-based brain interface and app at the design exhibition. It was, after all, the reason we had flown half way around the world. The exhibit was held in the impressive Grand Front Osaka Complex.

We couldn’t have asked for a better space to hold an event such as this one. The lighting was subdued, the floors were hardwood, the stage held a screen running all of the videos that had been submitted, and every exhibit had a booth with a banner featuring their project. 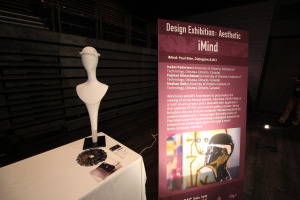 The next two hours in that room were a blur of people coming in to test out iMind; ask questions about the program, the project, the objective; and made conversation about where we were from and what we did as a research lab. The overall result of the exhibition was better than anything we could have hoped for. Having never demoed phase four of this project before the response to it was extremely positive. Many were excited to see that we had taken on a project such as this, and some even saw similarities between it and science fiction/animation references from their childhoods. And as the design exhibition came to a close we had to apologize to individuals who still wanted to try out iMind because we had to pack it up.

The design exhibition was filled with many talented individuals demoing their devices and Nathan Gale had the unique opportunity to talk and network with all of them while the rest of the team ran the booth. He collected business cards, made meaningful connections, and even tried on devices. This exhibition really highlighted what we have been focusing on so much at Decimal Lab: the interdisciplinary nature of these emerging technologies. There was an evident crossover between fashion, healthcare, entertainment, communication, culture, and art, which were all influenced by technological advancements to create the items featured at this exhibition.

All in all our journey to Japan was awe inspiring, educational, provided meaningful connections, opened doors for future collaborations/projects, and provided prospective on a culture that accepts technological advancements rather than fears them.