Isabel Pedersen, Elon Musk’s Neuralink, Neurorhetoric, and our Brain-implanted AI futures 2018 Annual Meeting of the Society for Literature, Science, and the Arts (Toronto, ON)

Speaker Lyuba Encheva will be delivering an exhibit on Coding Happiness and Microsolipsisms, 5 pm and 8 pm at Gallery 310, Ryerson School of Image Arts, 122 Bond Street.

When you are your Computer. Isabel Pedersen will be travelling to attend the IFA Summit in Berlin to give a Keynote.

Andrew Iliadis will be travelling to Carleton University, Ottawa to attend the Data Power conference to present a paper.

Andrew Iliadis will be travelling to Toronto to attend the Canadian Communication Association Conference to present a paper.

Andrew Iliadis will be travelling to San Diego, California to attend to International Communication Association Conference to present a paper (co-author Isabel Pedersen) titled “The Fabric of Digital Life: A Digital Humanities Archive for MOOCs”.

Isabel Pedersen will be travelling to attend the “Cinema del limite” at the Accademia delle Belle Arti “Mario Sironi” of Sassari, Italy to give a presentation.

Isabel Pedersen will be travelling to Ottawa to attend the Digital Humanities Summer Institute: Technologies East to give a Keynote

Isabel Pedersen attended The Computational Self and Politics of Data Workshop at McMaster University where she presented a talk titled “Emotions, embodied tech, and computable selves”.

Isabel Pedersen attended the Society for Literature, Science, and the Arts conference in Atlanta, Georgia to present a paper titled “Enculturating Decimal Lab”.

Isabel Pedersen and Ihor Junyk attended the Toronto School: Then | Now | Next conference in Toronto, ON to present their paper titled “Fearmonger: Affective wearable media and the digital uncanny”.

Bridgette Atkins travelled to Kingston, Jamaica to present at the International Conference for the Education of Teachers to present her thesis research in association with Decimal Lab titled “A Glimpse into the Kids, Creative Storyworlds, and Wearables Project: A Work-in-Progress” (Co-authors Isabel Pedersen, Shirley van Nuland, and Samantha Reid).

Isabel Pedersen and Tanner Mirrlees travelled to Calgary, Alberta to attend Congress 2016 and present a paper titled “Tracking the Rhetoric of Emergent Personal Technologies in a Digital Archive” at the Canadian Society for the Study of Rhetoric conference.

Isabel Pedersen was invited to present at the Canadian Association for Journalists annual meeting in Edmonton, Alberta. She presented a talk titled “From Carryables to Wearables to Implantables . . .” 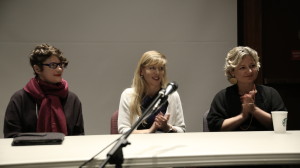 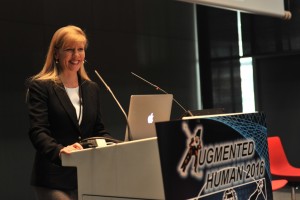 Cameron Nicoll travelled to Boston, Massachusetts to attend the JIBO Hackathon. Decimal lab will be one of the pioneering developers for JIBO: the first at home robot.

Kirsten Ellison will be attending the Society for Social Studies of Science conference in Denver, Colorado to present her paper “Go-go gadget vision or a cure for the blind? A rhetorical analysis of Google X’s bionic contact lens”.

Dr. Isabel Pedersen attended the Transhumanism Conference at Juniata College, Pennsylvania to  participate as a Plenary speaker. Her abstract can be viewed here: Plenary Abstract.

Samantha Reid and Nathan Gale also attended the Transhumanism Conference to give a presentation/demo on iMind as well as demo the Lyfeloggin’thoughtz suit and blog.

An art piece by Amelia Zhang will be on display at the RISD Museum Gallery Fever Dream. The piece was created in collaboration with the Decimal Lab and consists of an apparel piece with digitally printed neoprene featuring imagery that is inspired by techno-orientalism.

Dr. Isabel Pedersen spoke on a panel entitled “The Quantified Self” at SPUR Festival 2015  at the Al Green Theatre. The panel included Dr Isabel Pedersen, Prof Andre Spicer, Will Falk and is moderated by Nora Young host of CBC Radio’s ‘Spark’.

The Decimal Lab was showcased in a panel entitled “Augmented Reality in Everyday Life: Wearable Computing” at the MaRS WeAreWearables meetup in order to demo the technology which the lab developers have been working on. 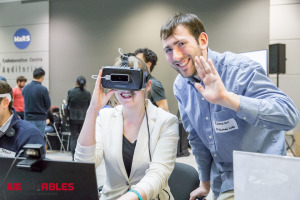 Members of the Decimal Lab hosted a Toronto Research Mobilization Event at MaRs in order to showcase three early prototypes that the lab members had been working on.

Samantha Reid delivered her paper, “Depictions of Youth on Youth Homicide in Films Set in Rural Environments”, at the American Society of Criminology annual meeting.

Dr. Isabel Pedersen and Dr. Tanner Mirrlees were in attendance at the Utopian Studies Conference in Montreal, Quebec to present their research for their collaborative paper, Elysium as Critical Dystopia.

Nathan Gale, a research assistant at the Decimal Lab attended the IEEE Games, Entertainment, and Media (GEM) Conference at the University of Toronto.

Dr. Isabel Pedersen gave a paper at the  Utopian Bodies and Media Inaugural Symposium of the Leverhulme International Research Network in Montreal, Quebec called “Someday We May Be Surfing With Our Eyes Closed”: Bionic Contacts, Transhumanism, and Myth.

Dr. Isabel Pedersen spoke on a panel entitled “Signal and Noise” at the Spur Festival 2014 at the University of Calgary. The panel included Dr. Isabel Pedersen and “Wired” columnist Clive Thompson. It was moderated by Matt Knapik.

Decimal Lab open house involving a talk by Dr. Isabel Pedersen followed by a meet and greet. Guests included the Board of Directors of UOIT.

Decimal Lab open house involving a talk by Dr. Isabel Pedersen followed by a meet and greet. Guests were given the opportunity to test some of the devices in the lab as well as interact with one another.

Decimal Lab hosts a workshop and video shoot. Among the attendees was Robert Tu, inventor of MeU technology.

Her talk was based on her book Ready to Wear which deals with the social implications of wearable computers, now and in the future.