Fabric or Fabric of Digital Life is a large, open, CollectiveAccess research database. It facilitates web-based, cultural analytics research on ‘digital life’. At its core, it looks at digital enhancements of human capabilities, especially regarding wearable, ingestible, implanted, and robotical technologies. It has informed social science, humanities, and digital humanities research over the past six years.  Working closely with partners such as the Canadian Science and Technology Museum (Ingenium), Temple University, University of Minnesota, and Trent University, Decimal continues to build its core research holdings and meta-data customization. 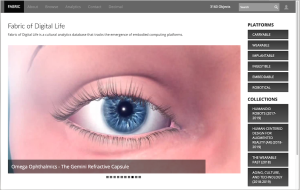 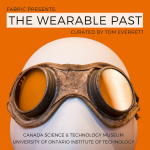 It is funded by Ontario Tech University’s Faculty of Social Science and Humanities, CFI, CRC and a SSHRC Insight grant (2014-2017). It has received ‘in kind’ support from the Canadian Science and Technology Museum and University of Minnesota.

Researchers, educators, archivists, sci-fi enthusiasts, and interested people wanting to review the collection are encouraged to email Decimal Lab at decimal.lab.uoit@gmail.com  to get a login.

Decimal Digital Museum involves exploration into work that blurs the line between the physical and the digital in gallery experiences. It highlights the use of embodied technology in order to view and interact with art work in galleries. 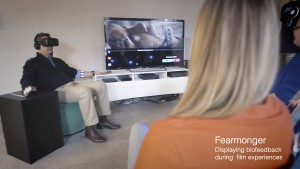 Fearmonger is a critical media project exploring the intersection between humans, technologies that are becoming aware of emotions (awareables), and a cultural instigator, the uncanny. Fearmonger technology is meant to be ironic, playful, critical, and exploratory. It uses technology in novel configurations to discover new convergences between art, affective response (biofeedback), and an emotionally and historically derived concept, the uncanny.

Countering the current discourse of techno-optimism, which emphasizes technology as a passive instrument in the service of limitless progress, we design for a paradoxical experience. The uncanny plays with how friendly, cozy, and homelike experiences can become suddenly fearful, unfamiliar, threatening, strange or simply odd. This interdisciplinary project unites researchers from Computer Science and Humanities fields. Broader issues include posthumanism, identity, privacy, and intellectual property. Inspirations include Sigmund Freud’s “The Uncanny”, Anthony Vidler’s The Architectural Uncanny, Guillermo del Toro’s cinematic gothic style, and painter Hieronymus Bosch (1453-1516). 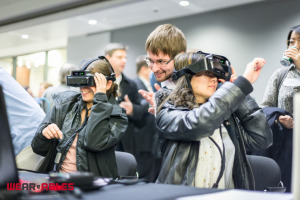 Decimal Lab is a META pioneer and one of the first labs in the world to work on the META platform. We designed and created a prototype for TombSeer, which evolves museum experiences using gestural and visual augmented reality. It offers a visually augmented environment to allow a museum visitor to view artefacts from new perspectives. Its first iteration augmented the Tomb of Kitines replica at the Royal Ontario Museum in Toronto.

iMind is a critical media project that explores an alternative dialogue between viewer, art piece, and artist.  iMind uses the Muse headset to encourage participants to “select” which art piece to view based on his or her brainwaves and emotions. Meant to deliberately incite reflection on the use of brain-computer interfaces, iMind offers dialogic engagement with aesthetic digital artifacts. It uses 100 digitized paintings by Paul Klee (1879–1940) from The Metropolitan Museum of Art (New York) that are not on view. 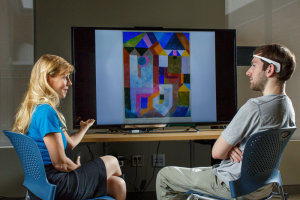 Aging and the Digital

Decimal Lab researchers at Ontario Tech University and collaborators at several universities have been contributing papers, research studies, events, and digital collections on the development of digital technology for older adults and their caregivers. Technologies include social robots, smart homes, ambient interfaces, digital assistants, and embodied tech. Social science work in the field of critical gerontology addresses the digital divide and its impact. Research creation projects explore the development of companion robots. Humanities research involves narrative, fiction, and the exploration of friendship between humans and non-human actors. The longer-term research agenda examines the social, ethical and legal practices for shaping and governing technologies that aim to alleviate especially social isolation and loneliness among elderly persons.

This project investigates the future of embodied technology through the lens of a child’s perspective using various methods.

Post-millennials, ‘generation Z’, is the generation born after 1996. If post-millennials live to 100 years, which is likely, then the span of their lifetime is 1996-2096. Over that time, they will be compelled to participate in a myriad of hardware platforms and data spheres which will inform their digital life futures. Robots, AI digital assistants, embodied tech gadgets, and increasingly, smart homes and classrooms, will characterize their experiences.

Important to postmillennialism is automedia. We define automedia as a genre of autobiography that involves the practices of creating, performing, sharing, circulating, and preserving one’s digital life narrative in a public sphere. Automedia revises identity formation. As shared digital life texts now circulate through the behaviours of other human subjects, and automatically at the whim of algorithms in data assemblages, automediality involves living one’s lives through perpetually evolving mediatized environments.

One study, Kids, Creative Storyworlds, and Wearables, examined how children think and feel about technology cast in narrative. We spoke to children over a month as they played with a smartwatch toy at home and in lab. This project involved visual analysis of their drawings along with ethnographic interviews (and their story-telling) in order to understand how children envision the future of embodied technology as their are experiencing transformative change.

Isabel Pedersen and Kirsten Ellison investigate the concept of bionic contacts as a means of everyday digital communication. This project examines the bionic contact lens as an imagined future which only exists in the form of prototypes; however, the mainstream media has idealized the concept of such a device as being a tangible reality which is not only possible, but imminent in the future. As a result, this project serves to explore the rhetorical and discursive means through which the imagined future of the technology has been celebrated in the current era of network culture.

Isabel Pedersen and Tanner Mirrlees investigate Elysium, a popular science fiction film, as a critique of the worst political-economic and technological conditions of capitalism in the 21st century. The film accomplishes this critique by showing these conditions being resisted and changed for the better.

The iShy project uses the MeU platform to explore the idea of shyness, silence, and instant messaging in an era of information overload. iShy inspirations range from the famous mime Marcel Mareau to the socially-awkward penguin Internet meme, a counter cultural response to social pressure. The art of silence takes many different shapes in the era of networked culture. The shy user “whispers” his frustrated shouts at the MeU and they appear instantly on his shirt. The MeU platform founder and director Robert Tu, has been featured on The Daily Planet, Disovery Channel, and the CBC. iShy is designed by Isabel Pedersen, Nathan Gale, Douglas Trueman and Samantha Reid.

LyfeLoggin’Thoughtz is a project which was created by Amelia Zhang in partnership with the Decimal Lab. The project involves the use of a narrative clip which is worn by Zhang in order to document her life. The narrative clip accomplishes this by taking a photo every 30 seconds which results in a sequence of photos that act as a life-log of the wearer’s activities. Zhang then uploads the content to a tumblr page, LYFELOGGIN’THOUGHTZ, in order to display the photos as an ongoing art piece.

More recently, the project has expanded to account for the popularization of the selfie. In order to do so, the narrative clip is mounted on a visor which results in a selfie being taken every 30 seconds. In addition to this, Zhang also wears a jumpsuit featuring a pattern of herself wearing the narrative clip while she is wearing the visor and narrative clip in reality. The jumpsuit not only serves to make a notable fashion statement and draw attention to the wearer, but it also generates humour.